The first industrial park developed and operated by Japanese players in Bangladesh is on track to open this year, serving as a hub for overseas manufacturers looking to tap the South Asian country’s 170 million consumers.

The Bangladesh Special Economic Zone, led by Japanese trading house Sumitomo, is about 20 kilometers east of the capital, Dhaka — within commuting distance of a key market of around 20 million people.

Construction has nearly finished at the 190-hectare site, which later could expand to 400 hectares. The Japan International Cooperation Agency agreed on Aug. 1 to invest in the 13 billion yen ($97.3 million) project.

“Poor infrastructure has hurt Bangladesh’s ability to attract investments” despite the potential of its market, a Sumitomo representative said.

Though roughly 100 special economic zones have been registered across Bangladesh, only a few are operating. The BSEZ notably involves public and private players in both Bangladesh and Japan. Sumitomo, which has developed seven industrial parks across Asia, plans to work with JICA on developing and operating the Bangladeshi park.

“This will be the first economic zone in Bangladesh that meets global standards on infrastructure,” said Chiharu Tagawa, who works in Sumitomo’s industrial park department. The BSEZ is equipped with embankments to prevent flooding, a major concern in the country. 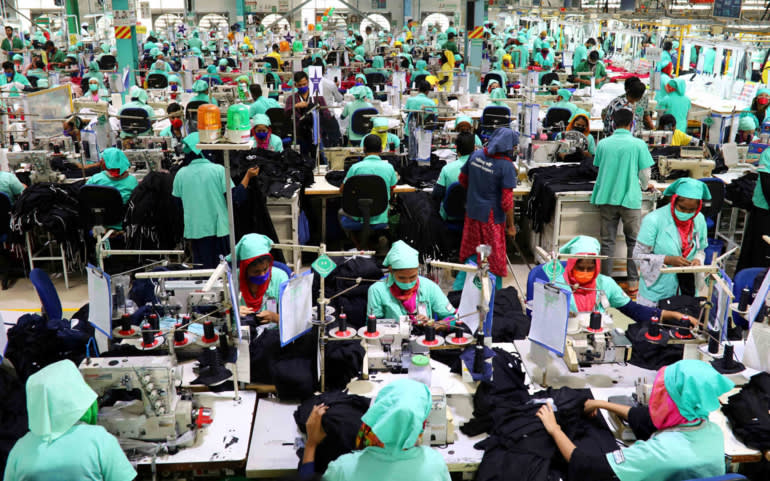 The garment industry produces around 80% of Bangladesh’s exports.   © Reuters

Bangladesh ranks eighth worldwide by population and has an average age of around 27. Honda Motor and Japanese food company Ajinomoto have made products locally since the 2010s with an eye on future demand. Labor costs are less than half as much as in Vietnam.

The number of Japanese companies operating in Bangladesh has tripled in a decade to around 340.

“Decisions have been delayed due to the coronavirus, but 40 companies are considering” setting up shop in the BSEZ, Sumitomo said.

Many Japanese companies had expanded into Myanmar’s underdeveloped market in the 2010s, but halted operations after the military took control of the government there in 2021.

In contrast, Bangladesh “has triple the population of Myanmar and is politically stable with friendly ties to Japan,” JICA Senior Vice President Keiichiro Nakazawa said. “It’ll grow economically like Vietnam.”

Bangladesh is wooing foreign companies. Garments make up around 80% of the country’s exports, but relying on cheap labor is not a sustainable economic strategy. The government offers tax breaks and other perks to businesses in the BSEZ as part of its push to bolster the manufacturing industry and reduce imports of industrial goods. The approval process for foreign investment will be streamlined.

Other countries also are developing infrastructure in Bangladesh. Neighboring India is partnering with Russia to build a nuclear power plant there, and is involved in coal power and port projects as well. China is building a special economic zone mainly in southern Bangladesh as Beijing advances a range of projects from highway expansions to rail and coal power with an eye on the country’s growing market.

ICICL pay excessive salary and bonus to its top management